I started playing Crime City last New Year's Eve upon the invitation of a good friend. At first I was reluctant for am not the kind of player who just tries something and abandons it right away. When I decide to play, I usually aim for a very high goal where I could also learn in the process.

The last one I played was Warbook and stopped once level 50 (the highest then) was reached.

For Crime City, I noticed that the game has continuously evolved. Also experienced from having a lot to none (sold all buildings just to complete missions) to rebuilding the current city format I have. 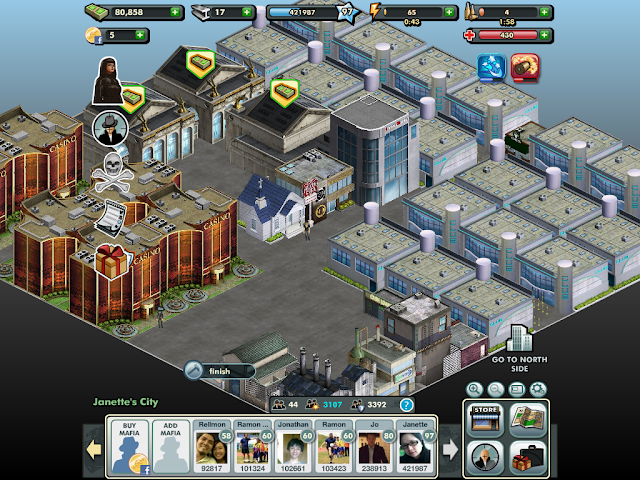 Currently at level 97 and will likely reach 100 in a few days. Hopefully by that time, I already bought a stadium (if at least 7 more people will add me to their mafia) which is the highest type of building that you can purchase in the game. Then that's it for me.

Anyway, for those of you who are leisure game players of Crime City, here are some tips I like to share:

There was a time I got consumed in upgrading existing buildings. However, as you get revenue, collectible items gets given as well where once you complete a set, you get special items or boost.

I noticed that buildings that offers high-income have interesting collectible that either gives more steel, money, respect, equipment, or boost. So once your hood is filled up, you can either upgrade to accommodate more buildings or keep on getting high value buildings as you resell existing ones.

In my case, I have focused on reselling and buying new buildings. I like the night club as it gives 24k revenue a day. The opera house is also ok as you can collect from 40k to 80k a day. Both buildings gives a lot of steel once you complete the items they give out.

There was a time that I keep buying boost to protect my hood. Later on, I decided to use spare income that is not enough to buy any building to get more equipment.

For boost, there are now buildings you can get that gives you boost such as the gun shop or ammo factory or biotech lab (for attack boost), loan shark office or collection agency (for collection boost), guard dog training center or safehouse or alarm company or guard tower or armory (for defense boost), mercenary bar or compound (for mafia boost), muay thai studio or shooting range (for xp boost), and consigliere's house or godfather's mansion (for loot boost).

If you have 5 buildings that gives you at least 1 of each type of boost, you can put your spare resources to vehicles, armor, and weapon.

Although I somehow feel that Crime City is already a dying game, it was great to see how it evolved trying to survive. I think for the new players, who likes to play quietly without bugging Facebook friends too much, this game can is still ok.

Posted by Janette Toral at 4:11 PM