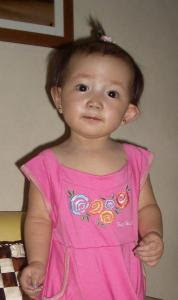 Last October 2006, I made a blog post encouraging people to give prayers for my niece - Iya. It was an emotional moment for our family that got me crying for a week whenever I think of my sister and her daughter's condition. If not for a miracle that happened then, we realized that she might leave us anytime.

Jhermie, the original life blogger in our family, gave birth to Iya last July 6, 2006. At that time, Iya was not feeding very well thus they have to monitor her and do some tests. She was confined for 3 more days at the hospital. When they brought her home, the couple still continued her medication for a week.

Everything went okay afterwards. Iya’s very happy and healthy until when she was 3 months old. They noticed she’s more irritable, crying a lot, and having difficulty breathing.

It was October 2006 when they decided to go to a Pulmonary Specialist. They thought at first she's just asthmatic. The doctor said she doesn’t hear any wheezing sound that would suggest she has asthma. So the doctor suggested for Iya to have an x-ray and consult it to a Pediatric-Cardiologist.

After the x-ray, the Pediatric-Cardiologist noticed that Iya's left ventricle is larger than its normal size and suggested Iya to have a 2D Echo. The following day, in the 2D Echo, the doctor said casually that Iya has a Congenital Heart Disease called Tricuspid Atresia (TA), Pulmonary Atresia (PA), and Atrial Septal Deffect (ASD).

Jhermie thought it can be treated until the doctor said that they need to brace themselves because Iya could live for only 5 years even if they do all the operations needed! The whole family was shocked! Jhermie just hold her baby tight and was so dishearten to think that Iya could be gone soon! I remember going to the Philippine Children's Medical Center and thought of cheering my sister up, give her hope. But one look at her, I broke into tears as well.

Tricuspid Atresia is a congenital heart defect that occurs due to abnormal development of the fetal heart during the first 8 weeks of pregnancy. The tricuspid valve, normally located between the right atrium and the right ventricle, does not develop properly during pregnancy.

Normally, oxygen-poor (blue) blood returns to the right atrium from the body, travels to the right ventricle, then is pumped through the pulmonary artery into the lungs where it receives oxygen. Oxygen-rich (red) blood returns to the left atrium from the lungs, passes into left ventricle and then is pumped through the aorta out to the body.

In Iya’s case (tricuspid atresia) the following occured:
In order for Iya to survive, these are the treatments that she will need:
Jhermie sought a second opinion and got referred to an Interventional-Cardiologist. Last October 15, 2006, Iya was scheduled for an Angiogram at PGH and found out that the diagnosis were really true. Fortunately in the Angiogram, they visualized a large collateral artery which supplies blood to the pulmonary artery. This collateral really helped Iya live up to now.

This February 2, 2008 Iya will have her first operation called Blalock-Taussig (BT) Shunt at Philippine Heart Center. The surgeon who will do it is Dr. Gisel Catalan. This operation could be done earlier but her pulmonary artery is too small then that’s why the Pediatric-Cardiologist suggested we wait and let nature take its course.

The operation itself can be fine but it is still quite high risk because the success of which would depend on how Iya will accept/respond to the Shunt or the tube that will be connected to her Pulmonary Artery.

The Shunt is also high pressure and that’s why it should only be there for 6 months.

After 6 months, Iya will need to undergo another procedure called Glenn Procedure. The doctor will replace the Blalock-Taussig shunt with another connection to the pulmonary artery. In this operation, the Blalock-Taussig shunt is removed, and the superior vena cava (the large vein that brings oxygen-poor blood from the head and arms back to the heart) is connected to the right pulmonary artery. Blood from the head and arms passively flows into the pulmonary artery and proceeds to the lungs to receive oxygen.

This procedure is quite complex and hospital facilities are of great importance. The family at this point are working together to financially support Iya's procedure. Estimated cost for this operation is about PHP2,000,000.00 to PHP3,000.000.00 (to be confirmed with doctor). Donors are being tapped at this point to find ways to get part of the cost covered.

If the Glenn Procedure shall succeed, we will wait for 4 to 6 years and Iya will go through the Fontan Procedure. The doctors said we will wait until we have the biggest size of veins/artery so the Fontan will not have to be done again as there are previous case that the vein/artery of a patient expands.

Jhermie at this point still really doesn’t know how to have all the money that is necessary. Aside from the hope that they’ll get a support from family and if successful, from organizations or corporation who provides assistance in this area, they are also considering selling their house when the time comes.

Jhermie's husband, Dave, is also waiting for his working visa in Australia. My husband currently works in Adelaide and referred Dave to work there. If he can start work this March or April, they’ll be able to also save more for Iya's Glenn procedure this August 2008. She also has several projects outside work and hope it would help increase their savings.

Looking back, Jhermie realized that Iya's feeding problem during her first day of life is the reason for this.

TA is very rare (1 in 100,000 birth) and it happens sporadically (by chance) but there’s also information on the Internet about excessive alcohol consumption in pregnancy which could be one of the risk factors.

When Jhermie read about this, she realized that the condition of her baby now could be her fault as she found out about her pregnancy only after 2 months and according to research, the baby’s heart is developing in the first 6-8 weeks of pregnancy and this is really a critical period (first trimester). During that time, Jhermie have been going out a lot to parties and had a week long celebration of her birthday, and was drinking hard.

Although we kept telling Jhermie that she should not blame herself, she could not help but do. Her heart breaks every time Iya would cry and her lips, hands, and feet would really turn “blue”….

But all Jhermie can do now is to ask for God’s forgiveness and His help for Iya’s condition. She prays hard for a second chance to raise Iya, to give her full life and promise to love and take care of her.

I'm sharing this story because my sister (and her family) matters a lot to me. I'm reaching out so that Iya will get the resources she needs to make her operation a success.
Posted by Janette Toral at 5:40 PM 5 comments:

When news came that the famous Filipina vlogger, Christine Gambito, famously known as Happy Slip, will be visiting the country, a lot of fans here and abroad were excited. This is her 1st time (or 2nd) to visit the Philippines as she got invited by the Department of Tourism.

During her two weeks stay in the country, she'll be visiting Bohol, Cebu, Palawan, Tagaytay, Boracay, and other locations. She will also be in a meet & greet session on February 7.

Christine is indeed an inspiration to Filipino bloggers and vloggers. May this open more opportunities for the country to be recognized as an exciting place to visit.

Of course, Christine's visit is now resulting to a deluge of blog posts about her and there'll be more in the next two weeks for sure. Here are some of them:


For the latest Philippine news stories and videos, visit GMANews.TV
Posted by Janette Toral at 2:18 PM No comments:

Last November 10 to 11, I took a Singapore Airlines flight from Adelaide to Manila. On this trip, I bought an inflight duty free item for myself as those are the few times where I get the chance to shop.

One of the items I bought was an Aigner watch that has a complimentary keychain. It was a nice watch and I liked its horseshoe design. Early this morning, I dropped the watch from my bed as I woke up and was surprised when I looked at my watch and saw that one of the numbers fell out of its place. 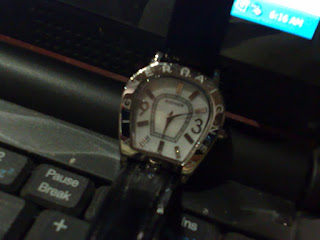 I find this item to be extremely disappointing as I only get to wear timepieces now whenever I am in Manila. While in Adelaide, twice to three times a week only as those are the days when I can go out.

Finding an item also sold on a duty-free catalogue of a prestigious airline - which is Singapore Airlines - I expected more. As this is the first time I ever encountered a not so durable product did I realized that I couldn't recall a warranty card that went along with the watch I purchased. (although I usually wear items like this right away and leave the packaging behind to avoid any discussion at Customs.) The KrisShop website neither has archive of products sold in its catalog in the past. (no file history found either in Wayback Machine)

Having this replaced would require me now to get in touch with them after I get to find its original receipt or request a copy from the credit card company. Another would be the process of returning the damaged product, shipping it, and if I'm lucky, get a replacement. But then again, there will be taxes in relation to that.

As a lessons learned, I will not buy a valuable timepiece and jewelry item again inflight.

(I gave Singapore Airlines a a heads-up after making this post and glad that they responded proactively.)
Posted by Janette Toral at 6:22 AM 3 comments:

RegaloService was probably the newest e-commerce player in late 2006. In less than a year, the site won two awards, the best gift site in the 1st DigitalFilipino.com Web Awards and winner in the ADOC ICT Awards.

Reggie Bundang's story in starting the site remains an inspiration for any woman who would like to achieve a balance, start their own business at home, pursuing one's dream, succeed, while taking care of family at the same time.

Her interest in shopping, reading, surfing, coupled with her background on online banking, business, and product development made her decide to pursue starting an online retailing business, RegaloService.

With minimal capital, she relied on her network of friends to get started. She also had to deal with challenges such as building credibility with her suppliers, finding the look and feel with her website that aptly represents what she wants, and getting a slice of the market. Help from partners, suppliers, and friends from all over were valuable along the way.

In the last W3O forum, I still remember what Reggie shared, knowing what you want, being professional and understanding in one's dealings, and building relationships were vital to success.

For 2008, Reggie plans to expand her service offerings in RegaloService.
Posted by Janette Toral at 6:37 PM No comments: