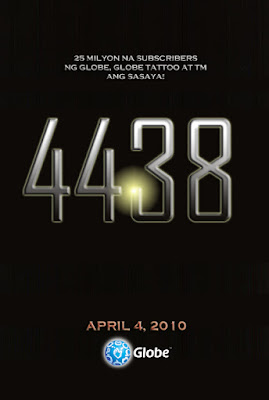 I got an event invitation recently about the 4438 service. According to the announcement, the service will be launched this April 4.

Since I heard it, started asking my Twitter and Facebook friends about the service wondering what they think this service will be.

Here are some guesses:
The possibilities are just endless. I guess we'll just have to wait till April 4 to find out what this new Globe service is all about. Will be out of town by then but good thing I have my roaming activated. It will surely be an interesting Easter Sunday.

Been using Globe for as long as I can remember. It is my hotline number for inquiries set as default in my DigitalFilipino.com website. Great to see all the variety of services meant to serve its prepaid users like me (and of course to their postpaid too). I'm sure with all this excitement being built-up, will likely be a loyalty program worth checking out.

How about you? What do you think this Globe 4438 service is all about?

Posted by Janette Toral at 4:46 PM

Email ThisBlogThis!Share to TwitterShare to FacebookShare to Pinterest
Labels: 4438, globe 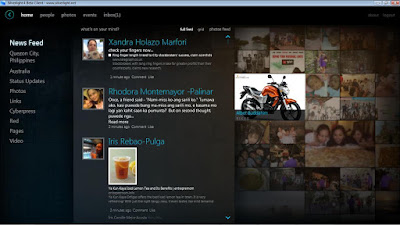 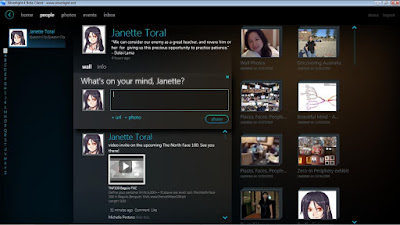 I was doing my digital handshake this morning (yes, still not done) when I saw this post from Guada about a client software that can be used to manage your Facebook account.

This is the Silverlight Client for Facebook. On your first visit to the link, it will ask you first to download the Silverlight 4 Beta software. Once installed, you can visit the link again and proceed installing the Facebook client.

What I like about the tool is how it shows you the latest post from friends who emailed you and latest updates from friends in the home page. You can make direct postings from the client software therefore removing the need to log on to your Facebook account from the browser.

However some limitations include:
I guess this client tool is ideal for users who just wants to view and post basic updates. Then logon to the website for more advanced Facebook activities.

I think having a desktop client software that allows you to do the advance capabilities within Facebook will be popular among its users. I hope a secure powerful application will become available soon.
Posted by Janette Toral at 4:59 PM

When friends spam you - should Facebook charge, close, or moderate its developer program?

One thing that made Facebook very popular is its developer program. This allowed users like you and me who are creative in developing our very own application and share it in the social network for users to try out.

However, since late last year, there were so much abuses committed against this program. This includes:

What is most common in these spam programs is that they are created in several variants using the same engine or re-uploaded several time using different user profiles. Some are also classified as a virus already.

To counter this, Facebook has now stopped applications from sending us notices. This is an issue especially for users who have authorized specific applications to update them such as NetworkedBlogs. I think what Facebook should prevent from sending spam notifications are those that were not authorized in the first place.

What is the worst thing that can happen to Facebook with these applications?

We always say that social networking in 2010 will be bigger than ever. If it is all about Facebook, then all I can think about is that the 1st quarter is all about users defending itself from various form of spam attacking the network.

Posted by Janette Toral at 3:04 PM

Google Buzz: is it really buzzing?

Like many Gmail users, such us Mike Abundo, I got excited when the news about Google Buzz came out and had my first taste of it. What I like about it includes:

However, as soon as I started using and configuring it, felt its disadvantage especially if you are already an active social network application user. This includes:

It will be interesting though if Buzz will allow me to do the following:

How about you? What do you think of Google Buzz?